I thought i would show some more paintings of William Trost Richards.

So here is a first painting which shows
Tintagel and these show dramtic light changes which give a very good effect.

a american painting this time, Gull Rock,Newport ,Rhode Island A dramatic paintiing with the waves crashing sea spray.Note the use of a lighter bit in the sky for dramatic effect.
The above paintings come from a excellent site www.williamtrostrichards

I rather like this painting by William Trost Richards, very refreshing the crashing waves.

Then there is this one just nice showing a headland.
A very interesting painter of seascapes makes you want to find out more about the artist which in due course I shall but thought I would share these with you first,

Hopefully this will be a clearer image of William Trost Richards sketching style.
`A seascape showing rocks graphite and watercolour.

This Striking painting was painted be the American painter William Trost Richards and shows Lands Land in Cornwall at its most dramatic.
You can almost feel the spray of the sea in this painting and I like the golden light the painter achieves,
I shall certainly be returning to this artist again as he paid 3 or 4 visits to Britain and all his paintings deserve a airing,I

In 1903 Herbert Bernard John Everertt and his wife moved to Dorset. Here he bought a yatch the ‘Warlus’ and spent much of each year cruising the South Coast of England.

The dramatic image of Lulworth Cove dates from this time and the viewpoint from the sea probably gives a much clearer idea of coastline.

Augustus john was a flamboyant character by all accounts and rather shocked the local inhabitants of Swanage with his Bohemian ways,
this painting shows cliffs in the background and two presumebly models posing.

Posted by Chris on June 29, 2009 in Art, Art Appreciation, Uncategorized

Charles Conder is fast becoming a favourite of mine at the moment.

This painting or to be more accurate oil sketch is of Swanage Coastguard station.

He painted this during a stay with his younger friend Augustus John. 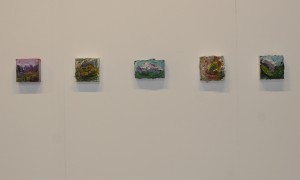 Remember a few weeks ago I was selected for a emerging artists show at GAF Burseldon, well here they are now installed.
Unfortunately I cannot attend as I am not really very well.All very annoying I am not sure I can even get to see them, anyway at least they were taken over and put up for which i am grateful.

A Belgian painter who is associated with the Neo-Impressionist movement. her early works used pointillist technique but she is better known for her impressionist style.
The painting that caught my eye and shown here is of a pleasant coastal scene